This is the same harm reduction information we use in our drug & alcohol leaflets. Please feel free to use it in your own resources or websites. Alternatively, you can buy designed and printed versions of this information from the Substance shop.

Just a few things to remember:

A drug that has similar effects to that of ketamine. It was produced as a legal alternative, until it was made illegal in February 2013. (see below)

Usually in white powder form, but may be found in tablets.

HOW IS IT USED?

Some people snort it, but this is painful and damaging to the nose. It is safer to wrap it in a cigarette paper and swallow it (bombed, parachuted), or put it in a drink and swallow it.

Methoxetamine is an anaesthetic with painkilling and hallucinogenic properties similar to Ketamine. It is what is known as a ‘dissociative anaesthetic’, which numbs the body, and creates the effect of removing users from their sense of reality.

The effects depend on the amount used but are also influenced by the user’s mood and environment.

Small amounts can cause feelings of euphoria and stimulation. At higher doses it can make you feel floaty and disconnected from reality. At larger doses it can bring on confusion, hallucinations, paralysis and out-of-body experiences.

The effects can be inconsistent, and vary from session to session and person to person.

Confusion and loss of spatial awareness can lead to accidents and serious injury without realising you’ve been hurt. High doses can cause breathing problems, unconsciousness or heart failure. Methoxetamine is extremely dangerous when mixed with other drugs or alcohol.

These are rarely seen with other recreational drugs and are not seen with acute ketamine toxicity.

Not yet fully understood. However, users report that increased tolerance and dependence can develop.

But if you are going to use Methoxetamine, the following tips will help you reduce some of the risks.

Take a small amount and wait. Don’t take more because you can’t feel anything happening after half an hour or so. Yes, it could be some blag white powder or pill, or even a completely different substance, but how do you know? Give it time to start. Taking too much too soon could put you on a bad one. Learn to recognise, and handle, the effects.

Mixing other drugs with Methoxetamine, particularly alcohol, is dangerous. The combination can affect your breathing, heart rate and blood pressure, and can have a greater effect than when used on their own.

Snorting Methoxetamine is painful and damaging to the nose. Swallowing the powder wrapped in a cigarette paper, will avoid damaging your nose.

If you do snort, flush your nose with clean water, and make sure you use your own straw or note. Don’t share them with       anyone else; they could have all kinds of germs on them.

Don’t use Methoxetamine on your own, or in an unfamiliar or unsafe environment. It is always safer to have someone else around, and tell your mates what you have taken.

If someone starts to feel unwell, take them to a chill-out area and take a break. Stay with them and keep an eye on them. If they start to feel worse, getting dizzy or experiencing a racing heart, get medical attention immediately and tell the medics what they have taken. If you are with someone who has taken the knock and you have to leave them alone in order to get help, put them in the recovery position first. 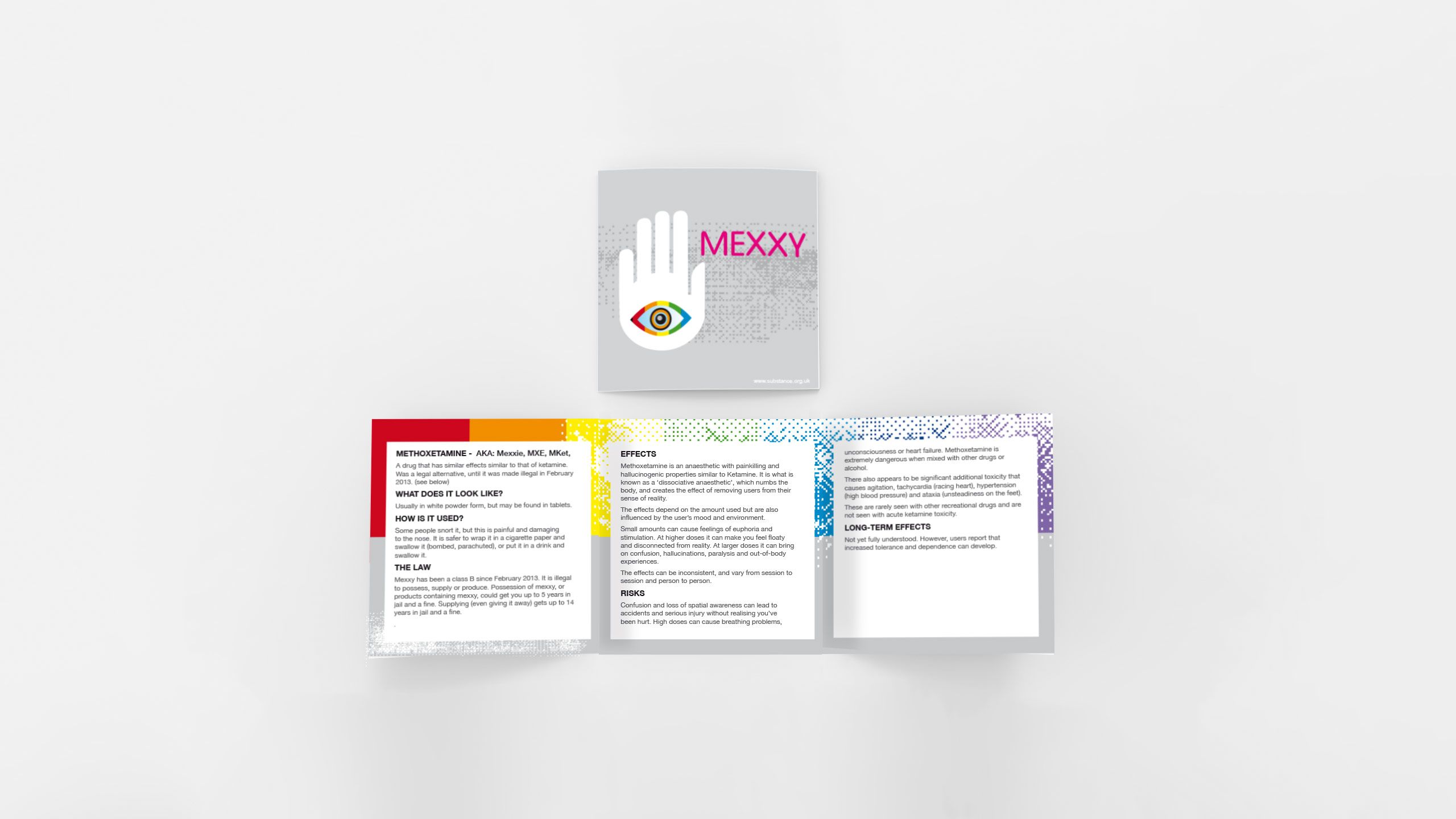 A range of harm reduction and drug & alcohol awareness booklets, leaflets and posters

We supply resources to:

DON'T MISS OUT!
Sign up for lots of lovely public health and substance misuse news, blogs and resource updates.